PrevPreviousWarning: Inherited Retirement Accounts Are Vulnerable to Creditors
NextHow to protect your money and property.Next

Going to Court With a No Contest Clause 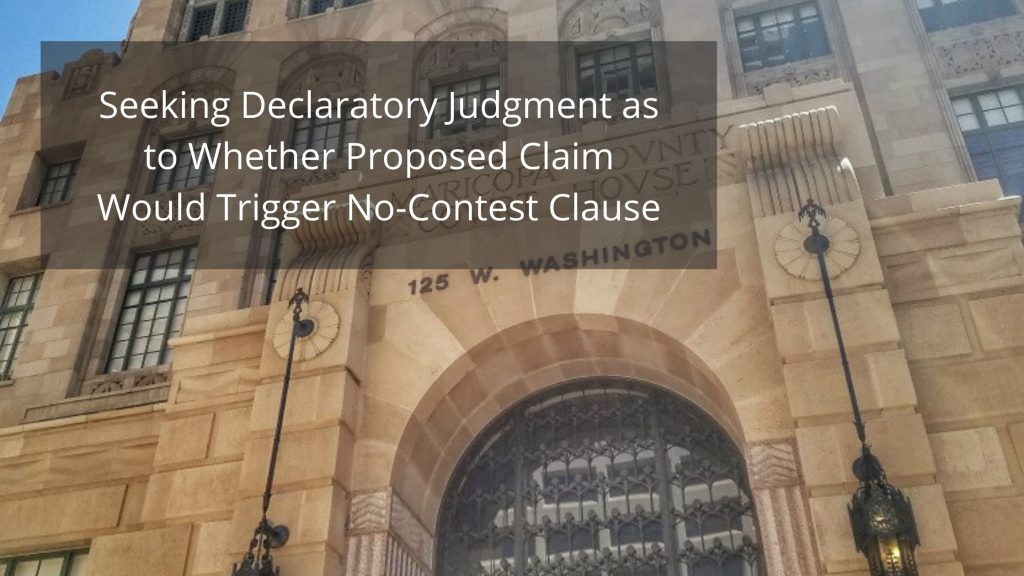 Trusts sometimes include a No Contest Clause (also sometimes called an In Terrorem Clause). In case you’ve never heard of the term, here’s a definition …

What is a No Contest Clause in a Trust?

The clause basically says that if you contest the trust in any way, you are removed as a beneficiary and you get no inheritance. That may be justified for some beneficiaries. For instance, if the beneficiary likes to sue people for no reason. But when if the trust was created as a result of undue influence or duress? Or what if the trustee is not managing the trust properly? (For example, maybe the trustee is taking a long time to sell a house.)

How do Most Arizona Lawyers Sue Trustees When There is a No Contest Clause?

The standard practice among many Arizona lawyers is still to either file a direct action to contest the actions of the trustee. This risks triggering the No Contest Clause. The reason for this is that since the trust appointed the person to be in charge, and you are contesting that person’s actions, you are therefore contesting the trust. The view is that since the trustee is mismanaging things, you probably wouldn’t get anything anyway. So you may as well roll the dice and go to court with a direct action against the trustee.

I’ve always thought it safer to ask the court first whether filing a court action against the trustee would trigger the No Contest Clause. This is done in other states in the form of a Declaratory Action. And a case from last year is one of the latest cases to demonstrate that this approach can work. The case was Hunter v. Hunter, 838 S.E.2d 721 (Virginia 2020). Here are the facts of the case.

Chip Hunter and Eleanor Hunter were siblings and the beneficiaries of a trust established by their mother. Eleanor was a trustee of the trust. The trust contained a no-contest clause triggered by conduct seeking to “invalidate, nullify, set aside, render unenforceable, or otherwise avoid” any provision of the trust, which would result in the forfeiture of a beneficial interest in the trust.

After the mother’s death in 2015, Chip received a brokerage statement from Eleanor revealing a substantial decline in the value of the trust assets over a period of less than six years. In response to Chip’s request for additional information from Eleanor about the trust assets, Eleanor (through her counsel) asserted that there was a provision in the trust relieving her of any obligation to provide that information. The provision upon which she relied stated that the settlor “waive[d] the Trustee’s formal requirements to inform and report set for under Section 55-548.13 of the Code of Virginia” (later recodified into Virginia’s version of the Uniform Trust Code’s “inform and report” provision, Va. Code § 64.2-775). Chip asserted that the provision did not relieve Eleanor of her obligation to provide the requested information under other sources of Virginia law, including other sections of the Virginia Uniform Trust Code, as well as common law.

Because Chip did not want to trigger the no-contest clause, he filed a declaratory judgment action with two carefully worded counts. Count two sought to determine the rights of Chip and Eleanor under the terms of the trust to require the trustee to inform and report under the relevant “inform and report” statute and common law. However, count one requested that the court initially decide whether determining Chip’s and Eleanor’s rights and duties under the trust would amount to a contest that would trigger the forfeiture of Chip’s beneficial interest in the trust. It further stated that count two should be considered “if and only if” the court found that the no-contest clause would not be triggered by a consideration of count two. Eleanor filed a counterclaim for a declaratory judgment that Chip’s complaint, read as a whole, triggered the no-contest clause, as it sought to avoid the effect of the “inform and report” waiver provision, which she contended was a contest of a material term of the trust.

The circuit court agreed with Eleanor, declaring that Chip’s beneficial interest in the trust was revoked and ordering Chip to pay Eleanor’s attorney’s fees. The Virginia Supreme Court reversed and remanded the case, expressly approving the alternative pleading model accepted in an earlier case, Virginia Foundation of Independent Colleges v. Goodrich, 246 Va. 435, 436 S.E.2d 418 (1993) (two-part “if and only if” alternative pleading filed by a successful litigant in a case involving a will with a no-contest clause). The court held that it is valid to request that a court make a preliminary determination on whether a no-contest provision would be triggered, and that Chip’s action did not trigger a forfeiture under the no-contest clause.

What the Hunter Case Teaches Us About a No Contest Clause

The Virginia Supreme Court’s ruling allows trust beneficiaries to file an alternative pleading initially seeking a declaratory judgment as to whether a proposed claim will trigger a no-contest clause. The declaratory action allows trust beneficiaries to avoid risking possible forfeiture of their beneficial interest in a trust. Attorneys representing beneficiaries in cases involving no-contest clauses should consider carefully drafting their complaints to include this alternative pleading model using wording similar to the “if and only if” language successfully used by Chip.

If you have a question about a No Contest Clause in a Trust or a Will, give us a call at 602-443-4888. Or submit your information to talk to a probate and trust attorney. We can help.